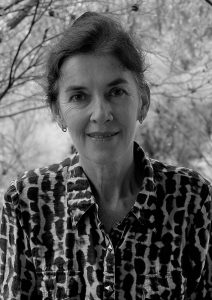 Kieran Finnane is a founding journalist of the Alice Springs News, established in 1994, now publishing as Alice Springs News Online. She studied in Sydney and Paris, arts and film studies. Her early employment was in television, but she has found her true home in print. Moving to Alice Springs in 1987, her journalism has covered a rich variety of situations in Central Australia, with a commitment to recognising complexity. She contributes arts writing and journalism to national publications, including Griffith REVIEW, Inside Story, Art Monthly Australia and Artlink. In 2016 her book of long-form journalism, TROUBLE: On Trial in Central Australia, was published by UQP.

‘This is a grimly fascinating and deeply thoughtful book …’ – Rosemary Neill, The Australian, 2 July 2016.