CASSE Workshops to change minds and save lives

Following is the full report from the second camp, written by Jamie Millier Tjupurrula, CASSE’s Program Manager for the Men’s Tjilirra Movement. (Click here to view the report from the first camp)

# I packed the car and drove to Papunya. There was a funeral in Mt Liebig on this day. I checked in with the art centre, they told me all the swags and equipment was already at the outstation. I drove out to the O/S and met the men halfway there. They asked if I could take some people in my car to the funeral in Mt Liebig. I swapped the young men into my car. I went and dropped my trailer at the camp and drove to Mt Liebig community for the funeral. The old man was a very good friend to me, and I had known him since I was 17. I spent a lot of time with him over the years. The families spoke highly of him and had many stories of his stockmen days and him being one of the best bush mechanics around the area. He was a young boy at Yayayi, he lived there until the move to Kintore.

It was a very sad day for the whole area there were a lot of people from all around. I left after the funeral and drove back to the camp. There were only 4 men but we would try and get more the next day. We had some food and set up the swags and slept.

# We got up and had breakfast. We organized some boards and paint and started to paint. I drove into Papunya to see if there were any men wanting to come out but I could not find any. I asked some middle aged men and they said ‘tomorrow’. I spoke with the art centre and asked if there were any men interested could they bring them out. I drove back to camp and helped some of the young men with their canvas and I did one myself. We worked like this for the day and had a good time. I spoke with the youth worker via phone and he said he would try to bring out some young men the next day and camp. I explained that the men needed to be engaged men. I backed up the conversation with everyone is welcome but explain the rules to the young men of not being disruptive.

It was getting dark so we cooked some food and went to bed.

# We got up had some breakfast. The men worked on their boards but motivation faded quickly. I tried to keep the men motivated but did not want to push them. I worked on one of my shields. The youth worker arrived after lunch and had some old men with him and another 5 young men. I got the men to try and start a canvas each, but most of the young men were not keen but did bits and pieces. The youth worker brought some aerosol cans of paint and would show the young men how to do some tag art. This was good for the young men and they were all engaged. I sat with the old men (from 5 mile) and one of them painted. This was a good afternoon. He said he would stay for the night but the other old man wanted to go back to Papunya. Most of the young men wanted to go back as well. The youth worker took the men back and came back himself and one other young man to camp for the night. Through the night the old man told stories and sung some songs (Ceremony ones). The men talked through the night.

# The youth worker had to go back in to community so he packed up and drove back. I got the men to keep going on the canvases or start new ones. The old man told me he was concerned for his own sons. He told me they were smoking too much and they don’t do anything. I told him he was not alone it is a problem everywhere around us, but when we tell our stores of the dreamings and practice our culture it can heal the people. I said we would keep trying to help the people. He set up a table and chair on the veranda of the house and joked about being Namatjira. He spent most of his time here and I sat and talked with him.

There was a water hole not far from the Out Station so we went to that and had a swim. When we got back the old man wanted to cut a shield from a bean tree so I organized the young men to help cut the tree. The youth worker came out with some young men only 2, but that was ok. We cut down the tree and one of the young men cut his own. The old ladies for the art center came out so the men organized tea and a big BBQ and fruit for all of the visiting women. The women spoke about art to the young men but also the women spoke about passing on the stories. The women asked me to get more men, I said I had asked a lot of the older men but they would not come. I said in most conversations with those men, when I ask them to help they tell me to come to you old ladies. I said maybe they have mixed up with grog too much and forgotten, I don’t know. We ate and the ladies painted bush tucker on a canvas and told the young men what the story was. It was a great afternoon and the women were happy and the young men were engaged with the old ladies. The man who works at the art centre, and it’s his outstation, got one of the old ladies to sing and he danced to her song. This was amazing and some of the other ladies joined in singing. The whole group felt the power of it and the young men watched. This was also funny in parts as well with the group yelling commands on how to dance but I give credit to the man for invoking this performance. This man will hopefully be a good asset for the future. When I spoke with the art centre manager she told me about the man that works for the art centre and how since the last trip he was more active with helping the old women from the art centre. It was getting dark so we helped load up the old women and gave them leftovers of food and biscuits.

I spoke to the young men that night and told them of the power they are gaining by being more of a part of their culture. I said if they continue their journey with song, dance and the stories they will be more powerful and have a better life. The young men spoke about the young men that didn’t come. I told them we need to do what is good for them and maybe others will see them and want to come, too. I said not everyone will come with us but the time is now to get our lore back, before the old people pass away.

We all started to clean and pack some of the camp up. The young men were amazing and helpful. We had some tea and went to bed. It was a restless night, humid and no wind.

# We all were up early, we had some tea and breakfast and packed the camp up and loaded all the food and equipment. We drove back to community and unloaded some of the stuff and I debriefed with the art centre manager. There may be some leftover funds that we could use for a half trip. I said maybe we could focus on Tjilirra and some dancing try a mixed trip and see how it goes, we would meet up after Xmas and see what funding is available. I went and had a shower and then drove to town. 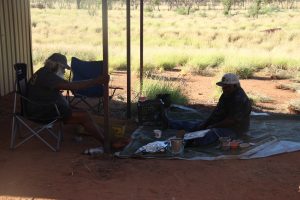