NITV Radio – Teaching men how to be men

The Men’s Tjilirra Movement (MTM) is based in communities in the central and western desert region. Program Manager Jamie Millier Tjupurrula works with the communities to strengthen the bonds and cultural connection between elders and youth through sharing knowledge of traditional tools (tjilirra), country, culture and lore.

Jamie has maintained weekly journal recordings of his work with the MTM, and the MTM’s progress, since its inception. Following is an excerpt from a recent trip to Kintore…

# Jess the youth coordinator came to my house and gave the food for the camp to me. I packed food and stuff into my trailer and drove to Papunya.

# I continued the drive to Kintore and arriving at about 9:00pm.

# I got up and met with the female youth worker and started to organize camping gear with youth workers. We drove around to pickup women 5 old ladies and four young ladies. We also organized for the other youth worker to bring more women and young girls when he was able to. 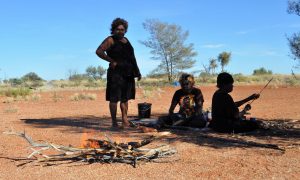 We drove to Tinki out station set up camp on the clay pans. The old women wanted to go for a hunt so we packed up the old women into the MTM car and drove to an area where there was a lot of good wood for women’s items such as digging sticks and dancing sticks.  We then drove out to some plains and got one turkey then we came back. The old women started on the items they cut, all the women cut items. The young women watched the old women. We cooked the turkey and cooked some food. The old women told stores of the out station and who lived there and how they lived.

“The old women started on the items they cut”

I spoke to the old women about new culture and women being shame for dancing topless. I said I would help where I could but they are the bosses for the dancing and how they do it. I told them that I grew up watching the strong women of the area dancing topless for a long time, but it is important to have the young ones dance with them so they are not shame. The old women agreed, the female youth worker was involved in the conversation. The old women sang and worked on the wood they had cut. I had some hair that I had and some from the male youth worker so I asked if any of the women wanted to try and make hair string, they did. I gathered the hair and they made the tools for it and worked on the hair string. The heat was intense and the women had worked well. The morning with the group was great and the women were happy. 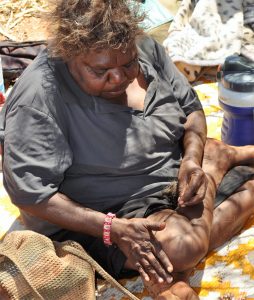 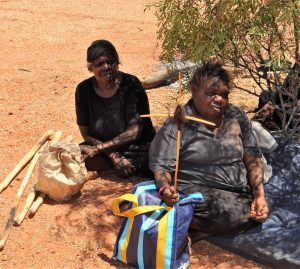 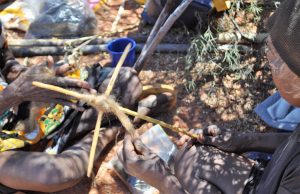 I said we could go hunting, so we did. We spoke about being back early to hopefully meet with more women if they came. We got five turkeys and then drove back to the camp site. There were a group of women and young women waiting for us. One man brought his wife and kids down as well. The mood was amazing and the women were on a high because of the turkey and the group of women that had come. Everyone worked together to prepare the turkeys and cook them.

“There were a group of women and young women waiting for us. One man brought his wife and kids down as well.”

The women started to get ready for the dancing. I had spoken with the female youth worker and discussed the shame issue with the young women and to give them opportunity to decide what they wanted to do. Old women took their tops off and started to tell the young women to have naked breasts. The female youth worker spoke to me and said some of the young women were shame and could the men go. The two men and myself moved the MTM car away from the camp and sat behind it. The man that we sat with was happy and saying this is good for women they need this law too. Us men spoke about the culture we all need to do. In conversation the man said we need to bring the young men down here and do this too. I said we should. The women organized and painted each other and sang and danced. I could hear the happiness of the women and us men could hear the singing – there was a good feeling in the air. The women came and got us after they had finished and the women were full of excitement and happiness, the old women were glowing. The women who came in the afternoon went back and the man and his family went back. Everyone had a good meal and a fun time. When it got quiet from the people leaving the old women talked more about what they wanted and that it was a great time but they want more camps and want to mix in with other communities to come and join up. I said this can be done through your young women and some of the other organization coming together.

# We got up at daylight and had some tea and breakfast. I asked the women if they wanted to stay for the day, but they said it was hot and they were tired. We started to pack up and get the swags rolled and food packed away. The women were very concerned about the items they had made and held them tight and would say “I have to have them close someone might steal them”. We drove back into Kintore and dropped everyone off at their houses. We organized the leftover food to be shared at the rec hall so it was not wasted.

# I went to the youth worker’s house and took notes and in the afternoon I debriefed with both youth workers and discussed the success and what we could do better.

# I meet with the youth worker and had a discussion about the recent suicide attempts and how to work with the young people in crises.

# I drove to town, I was extremely tired.