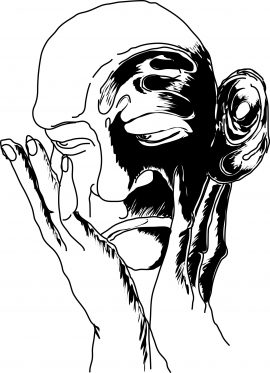 A thirteen year old boy in Tennant Creek, whose father is being held on remand, awaiting trial for the alleged brutal murder of his mother in January this year, has ‘gone off the rails’.

Over the months following his mother’s death, according to representation in court, the boy was being cared for by his grandmother, but his school attendance had dropped dramatically and he was suffering social anxiety, using alcohol, sniffing glue and had been arrested for a ‘rampage’ of damaging property.

He was a child whose life has been rampaged, ruptured, shattered and broken.

On the 6th of June 2017 the child appeared before a Judge in the Tennant Creek Youth Court regarding the charges of property damage and unpaid fines from previous offences.

What ensued was devastating:

“Family going to pay the money, are they…?”

“…Call one of them, anyone you like and get that person to tell me how grief results in breaking into banks.“

“…there is no one exercising parental control over you. You’re rampaging around the streets at night and no one cares. I haven’t heard from the police that anyone rang the police, or contacted the police to say that you were missing after midnight, because no one cares.”

“…you’ve got no one looking after you. That’s why you don’t go to school. It might be somewhat stereotyping in a socioeconomic way. But, there’s no one providing you with an evening meal, tucking you into bed, getting you up in the morning, giving you breakfast and sending you off to school. And, if there is, you’re not listening to them.”

“Now, I  accept, as I have said, that there’s been a bit of a breakdown in your family; a significant breakdown. But, you’ve dutchessed it. That means that you’ve taken advantage of it. You’re out and about on the streets with your mates, because no one is really in a position to look after you.”

“You’re not going back into the community. The community can’t afford you. It’s quite clear that you and your family are not going to pick up the damages for what you’ve caused. And, presumably, and I infer this, you’ve got no understanding of that. You don’t know what a first world economy is. You don’t know the difference between – you don’t know where money comes from other than the government gives it out.”

“People work. People make money. If they don’t make money, they starve, or they lose their businesses. And, there’s a very good chance that there will be businesses in this town that won’t continue after a number of years because of the number of times that they’ve been broken into. Because you’re not paying for it, your family’s not paying for it. You don’t even pay your fines. I’m remanding you in custody, in detention.”

These are some of the statements made to the boy by the Judge and are taken from the excerpt published in Alice Springs News Online on June 21.  I urge you to read the transcript.  It details a lawyer who was constantly interrupted and denied the opportunity to present the case for his client in full, and a Judge who seemingly had already made his decision about a boy whose life experiences in his thirteen short years have contained more trauma and dysfunction than most of us can even imagine.

News website Crikey.com included the following citations in relation to the case:

On Saturday 17 June ABC Darwin reported the following comments from criminal barrister John Lawrence QC, a former president of the NT Bar Association who is representing several former juvenile detainees before the Royal Commission into the Protection and Detention of Children.

What this judicial officer did and said … completely undermines the integrity and the prestige and, indeed, the honour of the court in which he sits. For a judge to directly say that to a 13-year-old defendant in his circumstances is disgraceful. I don’t think any adult should speak to a child like that. This judicial officer, believe it or not, is doing this while a royal commission is hovering over this entire legal system. This has gone way beyond the pale, and I think it’s a matter that the royal commission will hear about.

The Sunday Territorian, following a page 7 piece entitled “Judge rants at teenage criminal” ran the following comments in an editorial.

It is difficult to convey just how upsetting comments made by Northern Territory Judge [name deleted] to the 13-year-old son of a murder victim were … Judge [name deleted] displayed no sympathy – or basic compassion – for a young child facing a heartbreak few will ever experience … Judge [name deleted]’s approach appeared to centre upon retribution, not rehabilitation, or both. That is in no one’s best interests. Frustration at youth offenders is understandable. But throwing the book at vulnerable kids and leaving them to rot in prison is not the only solution.

According to reports (ABC News), the boy’s representative, the Central Australian Aboriginal Legal Aid Service (CAALAS),  and other organisations are making a complaint to the Attorney-General, the chief judge, and the NT administrator.

This is not the first time I have heard this Judge condemn an Aboriginal juvenile offender. In published papers and in my presentation at CASSE’s recent symposium, I have referred to a case several years ago where this Judge was sentencing a 16 year old Aboriginal girl who had pleaded guilty to assaulting a non-Aboriginal woman who had been staring at her in a car park. His remarks while sentencing were similarly harsh, finishing with “You poked. You spat! You stared. You failed! You have no idea what a civilised society is. You have no idea how to behave in a civilised fashion! This is a serious offence…no matter what government, what party, what policy, DRUNKS CONTINUE.”

However the issue is wider than one judge, albeit it must be said that it is also appreciated that judges and so on may well feel unutterable despair as the violence continues and containment fails. It may be that such condemnation is seen to be legal denunciation. From a psychological and humane perspective, however,  such distressing condemnation can only reinforce trauma and possibly recidivism. As Erwin Chlanda reported in Alice Springs News on the 24th of June, reader comments were overwhelmingly in favour of this Judge’s comments. How can this be so? This child needs care and containment and concern. It is an indictment and massive failure of systems that he can only be treated with contempt and incarceration. We are all responsible for the trauma and plight of this Child.