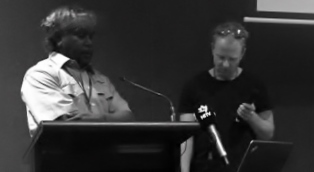 The CASSE Team was privileged to attend and participate in the inaugural National Aboriginal and Torres Strait Islander Suicide Prevention Conference held in Alice Springs on the 5th and 6th of May.

It was a powerful conference, opened by Stan Grant. We would like to share his opening speech in this blog…

Stan Grant’s speech at suicide prevention conference: I’m prepared to let go of my memory of wounds – for liberty

By Stan Grant, as published on SBS/NITV: http://www.sbs.com.au/nitv/the-point-with-stan-grant/article/2016/05/06/stan-grant-im-prepared-let-go-my-memory-wounds-liberty
‘We are here today in the face of grief, sharing our stories to help lift our hearts again’: The Point’s Stan Grant addresses the National Aboriginal and Torres Strait Islander Suicide Prevention conference in Alice Springs Friday, May 6, 2016.

“I just want to know how to sleep at night.”

The old man had come in from the bush to Alice Springs for this suicide prevention conference.

He has lost a nephew and a grandson to suicide. Like so many of our people across this country he is mourning another lost generation.

He is not alone here. Brother, sisters, sons and daughters have all gone before their time. Each have their own story but together we share a sadness that stretches across the centuries.

My friend Ernie Dingo told me of his meeting with this old man.

“I just want to know how to sleep at night.”

Ernie said it hit him in the heart. The old man wasn’t speaking just of suicide, he spoke to the sleeplessness of a people who are struggling to hold ourselves against the world.

‘The memory of wounds’

The polish Nobel Prize winning poet Czelaw Milosz said: “It is possible that there is no memory than the memory of wounds.”

The memory of wounds.

He was of course talking about the violent history of Europe – the memory of war and holocaust. But it speaks to us here too.

The memory of wounds we know are our memories. These are the memories we are born into. Memories of loss and sadness – memories of grief.

This is our inheritance.

Our very land can feel heavy with despair – the rolling hills – the jagged mountains – the deserts and plains – all of it can feel so terribly sad.

These places with names like Poison Waterholes Creek or Murdering Island.

I feel it because these places have been places of death for us.

The memory of wounds.

‘Sadness is so familiar that we mistrust happines’

It is easier – we know this all of us here – it is easier sometimes to live in our sadness than it is to embrace joy.

We love and we find laughter in each other, but we check ourselves because we know too well that grief waits for us. That soon it is also likely we will bury yet another of our people gone too soon. The mourning will begin again.

Sadness is so familiar that we mistrust happiness – sadness has come to tell us who we are. It is the well from which we draw our identities. Happiness can feel like surrender like letting go of the memory of wounds – memories that keep our families, our past alive.

I am aware that today I share this place with some of you who are grieving now, who have buried loved ones, who have lost family to the crippling, to despair that leads to suicide.

Welcome together to share our stories, because we know for so long we were written out of our nation’s history.

This was – in the words of anthropologist Bill Stanner – the great Australian silence – a cult of forgetting on a national scale.

The French philosopher Paul Ricouer says: “We must remember, because remembering is a moral duty we owe a debt to the victims, by remembering and telling we stop them from being buried twice”.

We cling to our stories to keep our people with us as we were being written out of history.

And these are our memories of wounds.

‘Reconciliation is built in sharing and hearing our stories’

We know that it’s this untold history that can divide us still in Australia – this forgetting festers like a sore.

Milosz reflecting on Europe could have been reflecting too on us when he said: “Crimes against human rights, never confessed and never publicly denounced, are a poison which destroys the possibility of a friendship between nations.”

Reconciliation is built in sharing and hearing our stories.

In this sharing we can begin to see each other in each other. To see our common humanity. I like to imagine we are bridging that divide but sometimes it can seem so wide.

If we needed reminding, we got it in the death of a young girl in Western Australia.

‘That ten-year-old girl was an Australian girl too’

She was ten-years-old and she took her life in a remote corner of the state.

Ten-years-old – a girl who should have been giggling with her friends at the back of the class or skipping rope in a playground – who could not face another day of life.

She is one of so many of our children lost.

Their lives should speak to every heart. Instead she was another Aboriginal girl dead in an Aboriginal community.

In the minds of too many, I fear, this is still a black problem – these are black lives: remote and distant.

This would not be a problem so remote and distant.

Why is it so difficult to imagine us as anything other than a people trapped in an inexorable and permanent decline.

It has been  as though the very foundations of our society could not find common cause with the modern world.

Bill Stanner – a great friend to Indigenous people and an incisive thinker -wrote of us in the 1960s.

“Ours is a market society and there’s is not. Indeed there is a sense in which the dreaming and the market are mutually exclusive.”

He didn’t mean offence. He was identifying a disconnect between two apparently antithetical traditions.

But 50 years later we are here to prove him wrong. We know we are walking in the dreaming and working in the market.

We don’t bring economic power we don’t hold the keys to political influence, but we speak with a different power: the power of our country.

And that power can bring down walls.  It is the power of Lingiari and Mabo and Perkins.

We stand at the walls that have held us out with the might of Joshua at the Gates of Jericho.

We know our bible stories, we know how Joshua commanded the trumpets to blare and the walls crumbled.

Well we speak with an awesome power too.

Australia for all its riches knows in its heart that the path to belonging in this land comes through us. And we have held out a hand of welcome often – even when that hand was spurned.

We cannot cling to our misery if it means passing that to our children.

We cannot just cling to endless grievance – this cannot be the foundation of our identities.

If the price of liberty is forgetting, then I am prepared to let go of my memory of wounds.

Before he died the great Crow Indian chief Plenty Coups spoke words that speak to our hearts too.

He said when the buffalo died, his people’s hearts fell to the ground, and they could not lift them up again. After that he said: “Nothing happened.”

For two centuries it has sometimes seemed for us too as if nothing happened.

But we are here today, in the face of grief sharing our stories to help lift our hearts again.

We are here to learn how to sleep again at night.

Click here to view Summer May Finlay’s overview of the conference, published in the Croakey Blog.