The power of Politics to promote healing 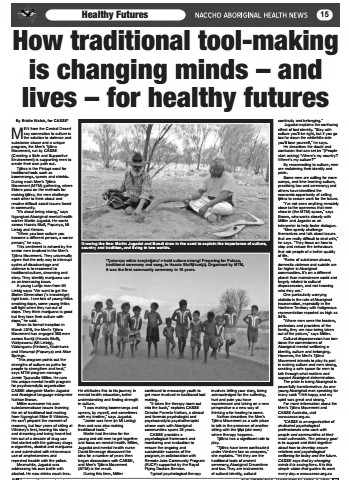 In case you missed it, the April edition of NACCHO Aboriginal Health Newspaper featured a story about how CASSE’s Men’s Tjilirra Movement is changing minds and lives for healthy futures.

Tjilirra is the Pintupi word for traditional tools such as boomerangs, spears and shields

“This program points out the strengths of culture as paths for people to strengthen and heal,” says CASSE’s MTM program manager, Jamie Tjupurulla Millier.

During MTM gatherings, Elders pass on the methods for making tjilirra and the men challenge each other to think about and resolve difficult social issues faced in community.

“It’s about being strong,” says Ngangkari Aboriginal mental health worker, Martin Jugadai, who is involved with the MTM. “When you lose culture you become a different person, a worse person,” he says.

This sentiment is echoed by the senior men involved in the Men’s Tjilirra Movement. They universally agree that the only way to interrupt cycles of disadvantage and violence is to reconnect to traditional culture, dreaming and story.