So what is recognition?

Recognition is a mirror for us all 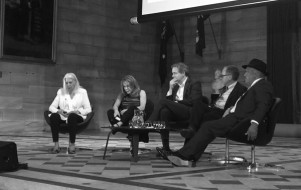 The following article was published by Sydney University, surmising the ‘What is Recognition?’ event, which was held on Tuesday the 10th of December.
Pamela Nathan, Director of CASSE’s Aboriginal Australian Relations Program, was a panelist at this significant event, alongside Professor Marcia Langton and Professor Duncan Ivison.
The conversation and subsequent discussions were extremely interesting and thought provoking and no doubt many of the large audience were left feeling jilted of time to explore the ideas presented in far more detail. To this end, we look forward to bringing you much more on the psychoanalytic imperative for recognition in the coming weeks.

Recognition is a mirror for us all, says Noel Pearson

Cape York leader Noel Pearson revived the debate around Indigenous constitutional recognition in a passionate address at the University of Sydney on Tuesday night.

On the same week as he was announced as a member of the newly appointed Referendum Council, Mr Pearson addressed a 500-strong crowd at the University’s Great Hall to argue for urgent reform around recognition, for the benefit of all Australians.

“If we’re to recover and rebuild and prosper in the future, we’ve got to deal with structures of power and the imperative for recognition in the new nation of Australia in order for that to happen,” said Mr Pearson.

“My only thought about that is that in that process, the rest of the country will come to recognise itself. Recognition will in fact be a mirror.”

Mr Pearson took to the stage at the Sydney Ideas event ‘What is Recognition?’ alongside renowned American psychoanalyst Professor Jonathan Lear from the University of Chicago.

Deputy Vice-Chancellor (Indigenous Strategy and Services) Professor Shane Houston set the tenor of the event with a stirring acknowledgement of country.

“Think for a moment also that when you look at the timbers that hold up this roof, they’re timbers taken from Bundjalung country on the north coast of New South Wales, that the marble floors were quarried from Gandangara country to the south-west of Sydney, and the sandstone that holds up these magnificent beams was quarried from Wangal and Gadigal country.”

Mr Pearson (BA ’87, LLB ’93) opened his remarks with a reflection on returning to his alma mater, and the great strides forward since he studied history and law at the University of Sydney in the late 1980s.

“I may be an illustrious graduate, but I cut a desultory figure as an undergraduate,” Mr Pearson said. “I’m very pleased that the University is now much better equipped to nurture Indigenous scholars.”

Mr Pearson discussed the impact of Professor Lear’s work on his own thinking on the importance of recognition to indigenous peoples, with the pair exploring questions of cultural identity, survival and integrity.

“I hear in [the word] recognition ‘re-cognise’ – ‘think again’,” said Professor Lear. “It’s not just about ‘them’, recognising ‘them’; it’s about recognising something in yourself.

“Any society is going to survive if it can adjust to new challenges. But it can’t survive if it’s destroyed from changing. So how do you keep the integrity of the traditions while also making adjustments?”

Mr Pearson also raised concerns around the structural impediments to achieving constitutional reform around Indigenous recognition, and the implications this has for racial inequality.

“For all that we do in our efforts to empower our people, what we do at a structural level is decisive,” said Mr Pearson.

Unless we create the means, the structural accommodation of the original peoples of this country, we’ll continue to have the parlous situation play out.

“Of course the most notorious indicator of that parlous situation is our imprisonment, [with] 3 per cent of the population furnishing 27 per cent of our prisons.”

Professor Ivison echoed Mr Pearson’s claims of the damage caused by the collective failure to recognise Aboriginal and Torres Strait Islander people in the constitution.

“Recognition as I understand it is a kind of political claim,” said Professor Ivison.

In his closing remarks on the long road to recognition, Mr Pearson outlined his hope that Aboriginal people can “walk two paths”, maintaining their traditions while also connecting to the global world.

“If I reject anything, I reject the idea that you can somehow make secluded islands of splendid isolation,” he said.

“We are now irrevocably part of the global world and all the pressures of the world’s economy and culture, technology and media. We’ve got to find the means to be able to sustain our identity and culture notwithstanding that.”