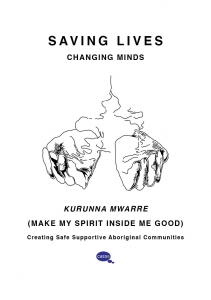 As we reach the half-way mark for Psychology Week 2015, I would like to share a story that shows, very briefly, how the psychoanalytic psychotherapist might work with someone to understand trauma and violence.

The story is taken from ‘Saving Lives‘, the first of CASSE’s series of booklets that explore some of the key issues facing people and communities in crisis. ‘Saving Lives’ is an introduction to CASSE’s Aboriginal Australian Relations Program. Its objective is to tell you what we can offer, what we do and how we think. These booklets are available online as free E-Books – click here.

‘Giorgio’ came to see me for counselling, as he had committed a serious assault on his girlfriend. Giorgio was an only child. His mum had become depressed and developed schizophrenia when he was a child. She was put in hospital on and off throughout his childhood. At this time his grandmother had looked after him. He said he has always looked after his mum because she is mad. She laughs or screams. He blamed his father for making her sick. His father used to bash her and smash up the house. He saw it happen. His father left home when he was six. He said he found it very sad and very boring growing up, and found school boring too. He got expelled from school for bashing a female teacher. He used to wag school and go home and check up on his mother to see if she was alright. He began to drink and do drugs. His friends did the same. He got into fights at pubs. He stole cars, but he never got caught. Giorgio had girlfriends from when he was twelve. He was sexually active and watched pornographic movies sometimes. He said his current girlfriend was a flirt.

When he came to see me he said he was depressed, didn’t feel like doing anything, kept to himself and stayed at home watching TV. He said he could get angry often over stupid things, for example, if “someone pushed him or swore”. He said he was “a bit frightened” of his anger when I asked him, and “frightened he could hurt someone bad someday”. I asked him what triggered his anger in the assault. He said:

She told me she was pregnant and going to get an abortion. I flipped out. I kept asking her if it was true and she said “yes” and she kept saying over and over, “I am going to get rid of the baby.” I wanted the baby. I started hitting and kicking her. It done my head in. She kept going at me and just kept going and going and screaming and blabbering. I had had enough.

I asked him toward the end of the first session, “Why now?”-namely what had happened recently that led him to criminally offend? He spoke spontaneously and without prompting. He acknowledged that he had a problem that he was frequently substance-affected and that most of his friends had been in trouble with the police. He said he “felt Giorgio 19 like twelve men on the drugs”, and that when he is not substanceaffected he does not “do crazy things” and that he is usually “real quiet”. He said he felt unwanted and alone and had angry feelings toward his absent and violent father. He acknowledged that there had been family problems that included the financial squandering of some money his grandmother had given his mother. He said at the time:

Bills don’t get paid. Rent gets overdue. I got very angry with my Mum. She plays the pokies. No-one is ever home. I think sometimes that no-one cares for me and stuff. It makes me feel sad. Sometimes I think about stuff. I feel unwanted. I think about revenge and about getting back at my Dad. Mum blew my grandmother’s money. It was to be a house for us. It took just four months to blow. I had imagined a double-story house, pool, plasma TV, PlayStation. And then there was the gang I was hanging about with. One of them is now in gaol for murder.

Giorgio came to see me for a year or more. In this time he bought to mind his violent feelings and developed a further understanding of what made him so mad and violent. He began to see how frightened he had been of his mum and her screaming outbursts, how he had been goaded by his mum and his girlfriend, how he had repeated his father’s violence, how unwanted he had felt as a kid and how he had been tantalised by the thought of a home and baby and felt crushed when both prospects were threatened and destroyed. As he became able to express some of the pain he had previously suppressed he was able to give up smoking marijuana regularly, although not completely, and has remained out of trouble.